Smoking: How Bad Is It? 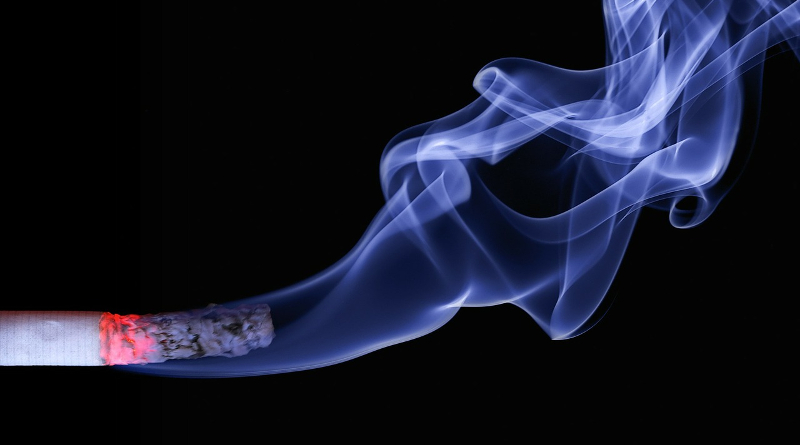 (DetoxifySamurai) The fact that smoking is detrimental to health is widely acknowledged. Fortunately cigarette smoking among U.S. adults has fallen to the lowest rate in generations to 17% from 42% in 1965.

The largest ethnic group of smokers were American Indians/Alaska Native (29%) followed closely by multi-race individuals (27.9%).  The group with the lowest amount of smokers were Asians (9.5%). By education level the largest percentage were among GED holders at 43%. Those with a graduate degree or higher represented only 5.4%.  The largest age group was individuals in the 25-44 age range at 20%, the lowest was >65 at 8.5%.  Among the regions the midwest had the highest percentage of smokers at 20.7% with the west being the lowest at 13.1%

Not only is there a health and economic cost to the individual but also as a nation. The total economic cost of smoking is more than $300 billion per year, including nearly $170 billion in direct medical care for adults and more that 156 billion in lost productivity due to premature death and exposure to second hand smoke.

Studies suggest that smoking affects hormone production. This could make it harder for women smokers to get pregnant.  Additionally, smoking is known to cause ectopic pregnancy, a condition in which the fertilized egg fails to move to the uterus and instead attaches in the fallopian tube. Ectopic pregnancy poses a serious risk to the mother and is fatal to the fetus.  Quitting smoking before getting pregnant is best.

Recent studies show that smoking is a cause of erectile dysfunction (ED). A man with ED can’t have and maintain an erection that is adequate for satisfactory sexual performance, which can affect reproduction. Cigarette smoke alters blood flow necessary an erection, and smoking interferes with the healthy function of blood vessels in erectile tissue.  Smoking also damages the DNA in sperm, which can lead to infertility or miscarriages.

The Center for Disease Control and Prevention (CDC) had done a good job of outlining the dangers of smoking and its affects on the body’s various life systems.  Therefore, the article from their website is reproduced below.

The health affects of cigarette smoking.

Cigarette smoking harms nearly every organ of the body, causes many diseases, and reduces the health of smokers in general.1,2

Quitting smoking lowers your risk for smoking-related diseases and can add years to your life.1,2 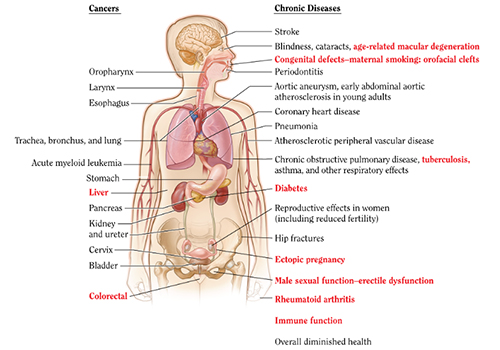 Cigarette smoking is the leading preventable cause of death in the United States.1

Smokers are at greater risk for diseases that affect the heart and blood vessels (cardiovascular disease).1,2

Smoking can cause lung disease by damaging your airways and the small air sacs (alveoli) found in your lungs.1,2

Smoking can cause cancer almost anywhere in your body:1,2 (See figure above)

Smoking also increases the risk of dying from cancer and other diseases in cancer patients and survivors.1

If nobody smoked, one of every three cancer deaths in the United States would not happen.1,2

Smoking and Other Health Risks

Smoking harms nearly every organ of the body and affects a person’s overall health.1,2

Most former smokers quit without using one of the treatments that scientific research has shown can work. However, the following treatments are proven to be effective for smokers who want help to quit:

Medications for quitting that have been found to be effective include the following:

Counseling and medication are both effective for treating tobacco dependence, and using them together is more effective than using either one alone.