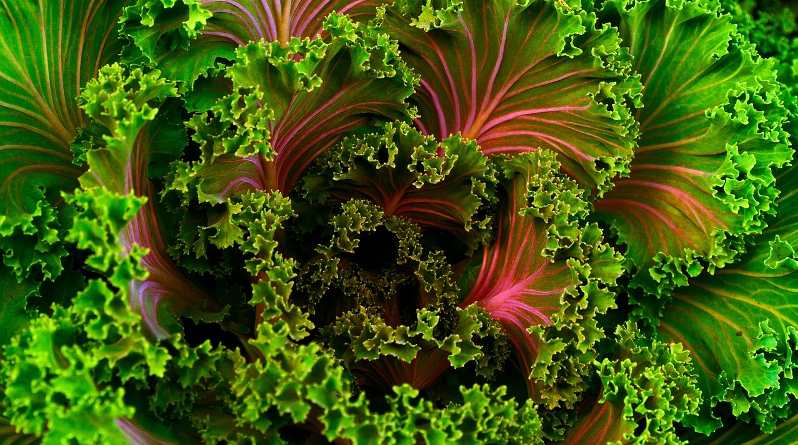 (DetoxifySamurai) Kale is a leafy green vegetable that belongs to the Brassica family, a group of vegetables including cabbage, collards, and Brussels sprouts that have gained recent widespread attention due to their health-promoting, sulfur-containing phytonutrients.  There are several varieties of kale; these include curly kale, ornamental kale, and dinosaur (or Lacinato or Tuscan) kale, all of which differ in taste, texture, and appearance. The scientific name for kale is Brassica oleracea.  The beautiful leaves of the kale plant provide an earthy flavor and more nutritional value for fewer calories than almost any other food around. Although it can be found in markets throughout the year, it is in season from the middle of winter through the beginning of spring when it has a sweeter taste and is more widely available.  Curly kale has ruffled leaves and a fibrous stalk and is usually deep green in color. It has a lively pungent flavor with delicious bitter peppery qualities.

While not as well researched as some of its fellow cruciferous vegetables like broccoli or cabbage, kale is a food that you can count on for some unsurpassed health benefits, if for no other reason than its exceptional nutrient richness.

Like most of its fellow cruciferous vegetables, kale has been studied more extensively in relationship to cancer than any other health condition. This research focus makes perfect sense. Kale’s nutrient richness stands out in three particular areas: (1) antioxidant nutrients, (2) anti-inflammatory nutrients, and (3) anti-cancer nutrients in the form of glucosinolates. Without sufficient intake of antioxidants, our oxygen metabolism can become compromised, and we can experience a metabolic problem called “oxidative stress.” Without sufficient intake of anti-inflammatory nutrients, regulation of our inflammatory system can become compromised, and we can experience the problem of chronic inflammation. Oxidative stress and chronic inflammation—and the combination of these metabolic problems—are risk factors for development of cancer. We’ve seen research studies on 5 specific types of cancer—including bladder cancer, breast cancer, colon cancer, ovarian cancer, and prostate cancer—and intake of cruciferous vegetables (specifically including kale). As a group, these studies definitely show cancer preventive benefits from kale intake, and in some cases, treatment benefits as well. 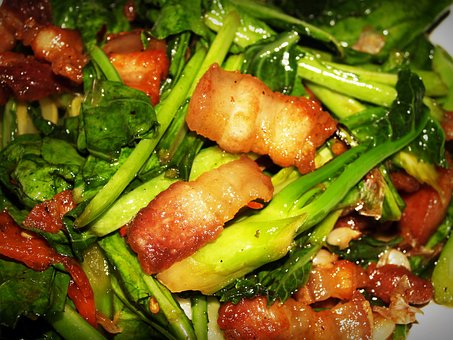 Kale’s cancer preventive benefits have been clearly linked to its unusual concentration of two types of antioxidants, namely, carotenoids and flavonoids. Within the carotenoids, lutein and beta-carotene are standout antioxidants in kale. Researchers have actually followed the passage of these two carotenoids in kale from the human digestive tract up into the blood stream, and they have demonstrated the ability of kale to raise blood levels of these carotenoid nutrients. That finding is important because lutein and beta-carotene are key nutrients in the protection of our body from oxidative stress and health problems related to oxidative stress. Increased risk of cataracts, atherosclerosis, and chronic obstructive pulmonary disease (COPD) are three such problems. Also among these chronic health problems is cancer since our overall risk of cells becoming cancerous is partly related to oxidative stress.

Within the flavonoids, kaempferol is a spotlight antioxidant in kale, followed by a flavonoid called quercitin. But recent research has also made it clear that at least 45 different antioxidant flavonoids are provided in measurable amounts by kale. This broad spectrum of flavonoid antioxidants is likely to be a key to kale’s cancer-preventive benefits and benefits that we expect to be documented for other health problems stemming from oxidative stress.

We have yet to see research on kale’s omega-3 content and inflammation, but we would expect this kind of research to show the omega-3s in kale to be an important part of kale’s anti-inflammatory benefits. It only takes 100 calories of kale to provide over 350 milligrams for the most basic omega-3 fatty acid (alpha-linolenic acid, or ALA). We suspect that this amount will be plenty to show direct anti-inflammatory benefits from routine kale intake.

We also have yet to see specific research on inflammation and kale’s vitamin K content. But we know that kale is a spectacular source of vitamin K (one cup of kale provides far more micrograms of vitamin K than any of our World’s Healthiest foods) and we also know that vitamin K is a key nutrient for helping regulate our body’s inflammatory process. Taken in combination, we expect these two facts about vitamin K to eventually get tied together in health research that shows kale to be an exceptional food for lowering our risk of chronic inflammation and associated health problems.

What we have already seen in the health research on kale is ample evidence that its glucosinolates provide cancer-preventive benefits. Kale is a top food source for at least four glucosinolates, and once kale is eaten and digested, these glucosinolates can be converted by the body into cancer preventive compounds. Kale’s glucosinolates and the ITCs made from them have well-documented cancer preventive properties, and in some cases, cancer treatment properties as well. At the top of the cancer-related research for kale are colon cancer and breast cancer, but risk of bladder cancer, prostate cancer, and ovarian cancer have all been found to decrease in relationship to routine intake of kale. The chart below presents a summary of the unusual glucosinlate phytonutrients found in kale, and the anti-cancer ITCs made from them inside the body

Glucosinolates in kale and their detox-activating isothiocyanates

* Indole-3-carbinol (I3C) is not an isothiocyanate. It’s a benzopyrrole, and it is only formed when isothiocyanates made from glucobrassicin are further broken down into non-sulfur containing compounds.

You can count on kale to provide valuable cardiovascular support in terms of its cholesterol-lowering ability. Researchers now understand exactly how this support process works. Our liver uses cholesterol as a basic building block to product bile acids. Bile acids are specialized molecules that aid in the digestion and absorption of fat through a process called emulsification. These molecules are typically stored in fluid form in our gall bladder, and when we eat a fat-containing meal, they get released into the intestine where they help ready the fat for interaction with enzymes and eventual absorption up into the body. When we eat kale, fiber-related nutrients in this cruciferous vegetable bind together with some of the bile acids in the intestine in such a way that they simply stay inside the intestine and pass out of our body in a bowel movement, rather than getting absorbed along with the fat they have emulsified. When this happens, our liver needs to replace the lost bile acids by drawing upon our existing supply of cholesterol, and, as a result, our cholesterol level drops down. Kale provides us with this cholesterol-lowering benefit whether it is raw or cooked. However, a recent study has shown that the cholesterol-lowering ability of raw kale improves significantly when it is steamed. In fact, when the cholesterol-lowering ability of steamed kale was compared with the cholesterol-lowering ability of the prescription drug cholestyramine (a medication that is taken for the purpose of lowering cholesterol), kale bound 42% as many bile acids (based on a standard of comparison involving total dietary fiber). Amongst all of the cruciferous vegetables, only collard greens scored higher at 46%.

Kale has a definite role to play in support of the body’s detoxification processes. The isothiocyanates (ITCs) made from kale’s glucosinolates have been shown to help regulate detox activities in our cells. Most toxins that pose a risk to our body must be detoxified by our cells using a two-step process. The two steps in the process are called Phase I detoxification and Phase II detoxification. The ITCs made from kale’s glucosinolates have been shown to favorably modify both detox steps (Phase I and Phase II). In addition, the unusually large numbers of sulfur compounds in kale have been shown to help support aspects of Phase II detoxification that require the presence of sulfur. By supporting both aspects of our cellular detox process (Phase I and Phase II), nutrients in kale can give our body an “edge up” in dealing with toxic exposure, whether from our environment or from our food.

We have yet to see studies that look directly at kale and its support for our digestive system. However, we have seen studies for kale’s fellow cruciferous vegetable—broccoli—in this regard, and we definitely expect to see future research that looks directly at kale and our digestive function. We predict that one area of digestive support provided by kale will turn out to involve fiber. We feel that 7 grams of fiber per 100 calories of kale is just too much fiber to fail in the digestive benefits category. We predict that a second area of digestive benefits will involve kale’s glucosinolates. The ITCs make from kale’s glucosinolates should help protect our stomach lining from bacterial overgrowth of Helicobacter pylori and should help avoid too much clinging by this bacterium to our stomach wall.