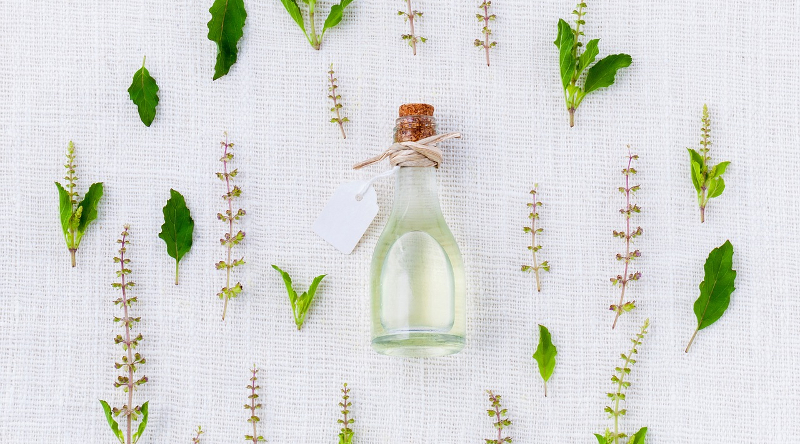 (DetoxifySamurai) Related to mint and looking like lavender, rosemary has leaves like flat pine needles touched with silver. It boasts of a woodsy, citrus-like fragrance that has become a feature of many kitchens, gardens, and apothecaries worldwide. It derives its name from Latin words ros (“dew”) and marinus (“sea”), or “dew of the sea.”

The Virgin Mary is said to have spread her blue cloak over a rosemary bush as she rested, and the white flowers turned blue. The shrub came to be known as the “Rose of Mary”. Rosemary was considered sacred by the Egyptians, Hebrews, Greeks, and Romans, and was used in the Middle Ages to ward off evil spirits and protect against the plague.

Rosemary oil has a clear, refreshing herbal smell, is clear in color, and is watery in viscosity. It is extracted from the fresh flowering tops through steam distillation, yielding 1.0 to 2.0 percent.

Its health benefits made it a favorite of Paracelsus,  a German-Swiss physician and botanist who contributed greatly to the understanding of herbal medicine in the 16th century. He valued rosemary oil because of its entire body-strengthening ability, such as the healing of sensitive organs like the liver, heart, and brain.

I recommend using fresh rosemary-infused oil on your salads as a delicious dressing. The herb itself has a thousand uses, and it extremely hardy and therefore easy to grow and maintain whether inside or out. You can add an entire sprig to your soups for a unique flavor.

The book’s A-Z list of rosemary oil uses covers many health concerns, including for the following:

Both rosemary oil and teas are added to shampoos and lotions. Regularly using the oil helps stimulate follicles, aiding in long, strong hair growth. You can also massage your scalp with the oil to nourish it and remove dandruff. Rosemary oil can also be used on your pets as a hair growth stimulant and for helping produce shiny coats.

This essential oil is a disinfectant and is often used as a mouthwash, helping remove bad breath. By removing oral bacteria, rosemary oil can prevent cavities, plaque buildup, and other dental issues. The mesmerizing aroma of rosemary is worth noting, too, making it an excellent inhalant.  Rosemary oil is used in candles, perfumes, bath oils, fresheners, and cosmetics, boosting mental energy when inhaled.

Used with 50:50 dilution, rosemary oil can be applied on ankles and wrists (two to four drops), applied to chakras or vitaflex points, directly inhaled, diffused, or as an dietary supplement.

Rosemary oil has been extensively used and studied since ancient times for a variety of health benefits. Today, it is included in many medicinal preparations, with many potential offerings. Organic Facts cites some of them:

Rosemary oil also appears to work wonders on anxiety. A study published in Holistic Nursing Practice in 2009 found that the use of sachets containing lavender and rosemary essential oils helped reduce anxiety associated with test-taking.

Using this essential oil seems to benefit brain health, too. A 2003 study published in the International Journal of Neuroscience, which involved 144 volunteers, found that rosemary oil helped improve mood in healthy adults. There is also a positive effect proposed for Alzheimer’s patients – a small study in 2009 found that one month of aromatherapy involving rosemary, lemon, lavender, and orange essential oils helped enhanced cognitive function, especially in Alzheimer’s patients.

How Does Rosemary Oil Work?

For addressing body circulation, mental fatigue, pain relief, decongestion of the respiratory tract, and as a skin and hair care agent, you can use rosemary oil several ways, including in burners and vaporizers, blended massage oils or in the bath, creams, lotions, and shampoos. As a general guideline, I advise adding two to three drops of rosemary essential oil to your bath water.

Honoring rosemary’s role in culinary traditions, The Prudent Homemaker has a Rosemary Olive Oil Bread recipe that you can try.

Rosemary oil appears to be a safe, effective essential oil for a litany of uses and purposes. Before using it topically, I advise you to dilute it in a carrier oil, as there is a risk of contact sensitivity. Do a skin patch test first.

Pregnant and breastfeeding women should avoid using rosemary essential oil during their pregnancy. Furthermore, consult a doctor first before administering the herbal oil to children. Self-treatment of a chronic disease, such as depression or Alzheimer’s, using rosemary oil may also hold serious consequences without professional advice.

Side Effects of Rosemary Oil

At times, rosemary oil may also cause allergic reactions, so consult your doctor for proper use. It is volatile in nature, which means it can cause vomiting an spams. Therefore, do not ingest it.

Again, it is strongly recommended for pregnant and breastfeeding women to avoid using rosemary essential oil, as it can affect the fetus or lead to miscarriage.