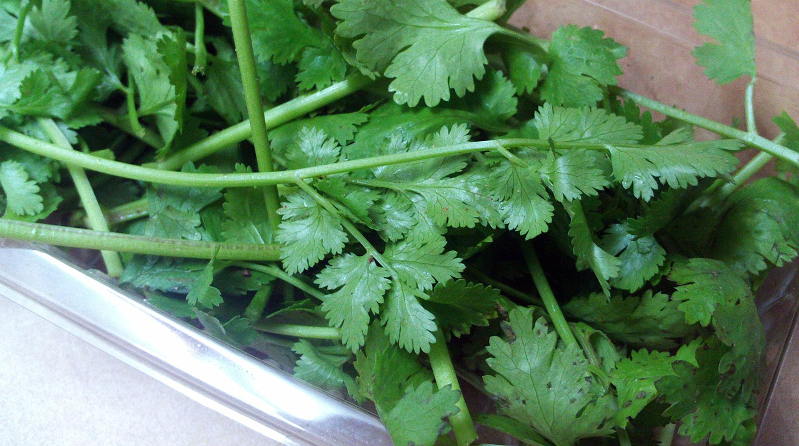 (DetoxifySamurai) Coriander, also called Chinese parsley, is native to regions spanning from southern Europe and northern Africa to southwestern Asia.  Cilantro is the Spanish word for coriander, also deriving from coriandrum.  It is the common term in North American English for coriander leaves, due to their extensive use in Mexican cuisine.  All parts of the plant are edible, but the fresh leaves and the dried seends are the parts most traditionally used in cooking. Coriander seems to have been cultivated in Greece since at least the second millennium BC.  Coriander was brought to the British colonies in North America in 1670, and was one of the first spices cultivated by early settlers.

Lets look at some of the benefits associated with cilantro.

1. Rids the Body of Heavy Metals

Arsenic, cadmium, aluminum, lead, and mercury can become resident in our tissues leading to heart disease, hormonal imbalances, neurological conditions, infertility, and so much more. Cilantro, also known scientifically as “Coriandrum sativum”, has been shown to bind these toxic metals together, loosening them from tissue, and facilitating their elimination from the body.

One study found that Coriandrum sativum significantly protects against lead induced oxidative stress, while another study found that cilantro actually accelerates the removal of heavy metals from the body.

Dr. Omura, director of Medical Research at the Heart Disease Foundation, found in this study that antibiotic use is linked to the buildup of heavy metals in the body. He believes that antibiotics actually can protect the heavy metals causing certain infections to relapse, even after an entire course of antibiotics.

In this study, cilantro was used to help remove stubborn heavy metal deposits that continued to plague patients, even after initial infection symptoms had faded.

Results of the study showed that by supplementing antibiotic drugs with cilantro, cilantro is able to rid the body of the heavy metal toxins, and keep the infections from arising again. Cilantro’s superior detoxing ability is why I include it in my heavy metal detox regimen.

Oxidative stress is linked to a wide array of degenerative diseases including some types of cancer, heart disease, arthritis, Alzheimer’s Disease, macular degeneration, and much more.

Cilantro’s strong antioxidant properties, in part due to the flavonoid quercetin,  helps to protect against the damage caused by free radicals in the body. A recent study found that cilantro actually protects against oxidative stress, through its high antioxidant effects.

Cilantro benefits your sleep cycle naturally and calms nerves, and can improve sleep quality through its natural sedative effects. A recent study published in the Indian Journal of Pharmacology found that high levels of cilantro extract produce the same levels of anti anxiety effects as the popular prescription drug, Valium (diazepam).

Valium’s side effects include confusion, hallucinations, risk-taking behavior, agitation, aggression, memory problems, muscle weakness, and many more. Cilantro can relieve anxiety, and improve your sleep, without these potentially dangerous side effects.

Cilantro’s leaves and stems helps to lower blood sugar levels in animal studies. The most significant study published in the Journal of Food Sciences, showed that when diabetes has been diagnosed, cilantro helps support healthy liver function, and helps to balance blood sugar.

Researchers believe that the results support Coriandrum sativum (cilantro) being used in cuisine, would in fact be a remedy for diabetes.(7) Chop cilantro’s leaves coarsely, and the stems finely, and add to salads, salsas, and smoothies to lower your blood sugar levels and improve overall health.

According to the American Heart Association, a diet rich in potassium is an important part of controlling blood pressure because it lessens the effects of sodium on the body.(8)

High blood pressure increases your risk for heart failure, ischemic heart disease, and thickening of the heart muscle. In addition to helping lower blood pressure, cilantro benefits actually helps to dissolve cholesterol build up in the arteries, protecting against atherosclerosis and heart disease.

In the same study reference above about diabetes, researchers indicated that cilantro lowers total cholesterol and triglycerides in the body. Another study published in Food and Chemical Toxicology found that cilantro’s rich polyphenolic content and natural cardio-protective nutrients are responsible with preventing the oxidative damage that is specifically associated with cardiac damage and is able to prevent myocardial infarctions.

Lowering blood pressure, reducing cholesterol, and protecting against damage associated with cardiac impairment – easy to see why we should all enjoy more cilantro.

Urinary tract infections may be caused by E. coli, staphylococcus bacteria, sexual activity, genetics, or diabetes. Cilantro’s antibacterial compounds help to keep the urinary tract healthy, and free from unhealthy bacteria in a healthy alkaline environment. In addition to cilantro, coriander seeds are helpful in relieving symptoms, if a UTI does occur.

Simply soak 1 ½ teaspoons of dried coriander seeds overnight in 2 cups of water. Strain and drink, or just add to your morning smoothie. It will help relieve the discomfort and pain associated with the UTI, and help to speed your healing.

Cilantro has been used throughout the world for thousands of years to settle nauseous tummies, prevent gas and bloating, relieve indigestion and heartburn, and ease stomach cramps. It aids in efficient digestion, by helping to produce digestive enzymes that aid in the breakdown of foods. In many cuisines, fresh cilantro accompanies hot and spicy dishes because of its cooling effects.

Hot curry dishes, green chili, and spicy Thai noodle dishes all are better tolerated by many people with the simple addition of just a touch of fresh chopped cilantro. This cooling effect can help prevent heartburn after spicy meals. If gas or bloating is a problem, try adding chopped cilantro as a garnish for legume dishes, and to salads.

Cilantro benefits not only detox the body but also protect it from infection and toxins. Its natural antibacterial properties helps to protect against both food and water borne diseases including food poisoning, dysentery, salmonella, cholera, and particularly listeria. Research published in the International Journal of Food Microbiology studied dill, coriander, eucalyptus, and found that cilantro was particularly effective in fighting listeria.

Coriander seeds from cilantro actually helps to support healthy menstrual function by helping regulate proper endocrine gland function, and the hormones that regulate menstrual cycles. In addition, coriander can help reduce the bloating, cramps, and pain during the cycle.

Researchers noted that lifestyle factors of individuals with diets rich in these nutrients showed lower incidences of neurological degeneration.

Researchers believe that coriander can protect against colon cancer by reducing cholesterol levels, and increasing the excretion of sterol compounds and bile. This process decreases toxic levels in the colon, lowering the risk for cancer.

Cilantro is used both internally and externally as a remedy for skin irritations including hives, sunburns, and poison ivy. It’s natural anti-histamines helps to calm the immune system response against allergens. Fresh cilantro blended with coconut oil can be blended together and applied topically to soothe sunburns, dry skin, poison ivy, and hives caused by an allergic reaction.

To get all the cilantro benefits, instead of blending with coconut oil, blend with water, and strain. Apply the cilantro to the skin, and drink the remaining juice. This two-pronged approach is particularly helpful when seeking relief due to an allergic reaction.